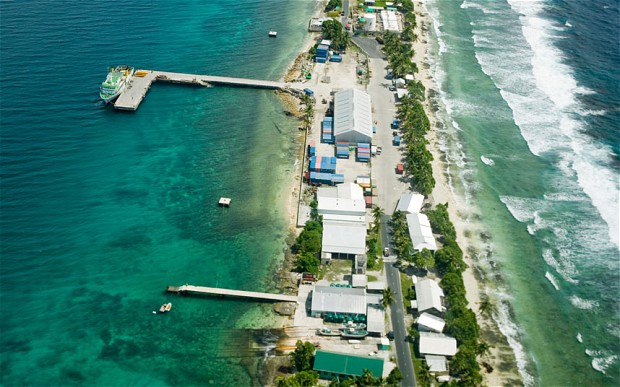 Sea levels are rising 60 per cent faster than the United Nations originally predicted, according to a new study, putting small island states and coastal cities at risk.

It found that sea levels have been rising by 3.2mm per year for the last 30 years, rather than the 2mm previously calculated.

If the trend continues then sea levels could be rising by 9mm per year within a century. The total rise by 2100 could be 1.2m.

The findings come as almost 200 countries gather in Doha, Qatar for the latest UN meeting on climate change. Already poorer nations exposed to sea level rise are complaining that the negotiations are moving too slowly to help stop small islands being lost forever.

A 1m rise in sea levels by 2100 would wash away much of small island states like Tuvalu and the Maldives. Delta regions like Bangladesh, where millions of people live, will be flooded and coastal cities like New York will have to build up defences.

Already the Thames Barrier plans to protect London against a rise of more than 1m.

According to GlobalFloodMap.org, that calculates the impact of sea level rise on different countries using NASA data, more than 22,000 people would be exposed to flooding in Qatar if sea levels rise by more than 1m.

Originally the Intergovernmental Panel on Climate Change (IPCC), the science arm of the UN, said global warming would cause sea levels to go up by about 2mm per year, rising by up to 60cm by 2100.

But the new findings, that use more up-to-date satellite data, found already the rise in sea levels is accelerating.

Stefan Rahmsdorf, of the Potsdam Institute for Climate Impact Research, who led the study, said carbon dioxide levels in the atmosphere are driving global warming, which in turn causes ice sheets to melt and sea level rise.

“This study shows once again that the IPCC is far from alarmist, but in fact has under-estimated the problem of climate change,” he said.

Marlene Moses of the Pacific island of Nauru, that has a smaller carbon footprint per year than the whole Doha conference, said the world must cut carbon to stop global warming and sea level rise.

Speaking on behalf of the the Association of Small Island States (AOSIS), she called on more ambitious targets to cut carbon.

The EU and a handful of other states have agreed to sign up to targets from 2013 as part of a second commitment period of the Kyoto Protocol.

The rest of the world, including the two biggest emitters China and the US, are working towards a global deal for 2015 that would cut carbon from 2020.

Ambassador Moses said all countries need to ramp up ambition before 2020 to stop “a man-made disaster of epic proportions”.

He pointed out that sea levels will rise even more over hundreds and thousands of years.

“The rise cannot go above more than around 1.2m by 2100, because ice melts so slowly but it will continue to go up if the world keeps warming.

“The worse-case scenario, if both Greenland and the West Antarctic ice sheets melt, could push up sea levels by 13m,” he said.

However Prof Andrew Shepherd, Professor of Earth Observation at the University of Leeds, was more cautious.

He said more evidence was needed to show ice is melting in the Antarctic.

“This study presents an interesting comparison of variations in global temperature and sea levels, and suggests that in future sea level rise might be greater than the models used by IPCC have predicted.

“Of course for this to be correct, one has to consider the potential sources of that greater increase. In their study, Rahmstorf et al suggest that accelerated losses from the polar ice sheets may be one such source. However, when all of the available satellite data are considered, there is in fact little evidence to support the suggestion of accelerated ice loss from Antarctic. One may therefore need to look elsewhere for potential sources of additional sea level rise.”

:: A separate study by the UN Environment Programme (UNEP) warned that melting permafrost could make global warming a lot worse.

This is when frozen organic matter under the ice in mountains or at high altitude melts, releasing methane.

The increase in greenhouse gases means more warming, causing yet more melting of the permafrost in a “feedback loop”.

UNEP said the potential impact of the“permafrost carbon feedback” needs to be taken into account when calculating temperature rise.

This would mean cuts in carbon would have to be even more ambitious, to make up for the greenhouse gases released by melting permafrost.

UNEP also warned that melting permafrost will cause buildings, roads and bridges to collapse.