Scientists at the Large Hadron Collider beleive their experiments may have created a new type of matter.

They say, collisions between protons and lead ions at the LHC have resulted in surprising behavior in some of the particles created by the collisions.

This suggests the collisions may have produced a new type of matter known as colour-glass condensate, as reported on MIT news.

When beams of particles crash into each other at high speeds, the collisions yield hundreds of new particles, most of which fly away from the collision point at close to the speed of light.

However, the Compact Muon Solenoid team observed that in 2million lead-proton collisions, some pairs of particles flew away from each other with their respective directions correlated.

‘Somehow they fly at the same direction even though it’s not clear how they can communicate their direction with one another. That has surprised many people, including us,’ says MIT physics professor Gunther Roland, whose group led the analysis of the collision data along with Wei Li, an assistant professor at Rice University.

A paper describing the unexpected findings will appear in an upcoming issue of the journal Physical Review B.Previous research at MIT saw the same distinctive pattern in proton-proton collisions about two years ago. The same flight pattern is also seen when ions of lead or other heavy metals, such as gold and copper, collide with each other. Those heavy-ion collisions produce a wave of quark gluon plasma, the hot soup of particles that existed for the first few millionths of a second after the Big Bang.In the collider, this wave sweeps some of the resulting particles in the same direction, accounting for the correlation in their flight paths.It has been theorised that proton-proton collisions may produce a liquid-like wave of gluons, known as colour-glass condensate.

This dense swarm of gluons may also produce the unusual collision pattern seen in proton-lead collisions, says Raju Venugopalan, a senior scientist at Brookhaven National Laboratory, who was not involved in the current research but has previously researched the subject. 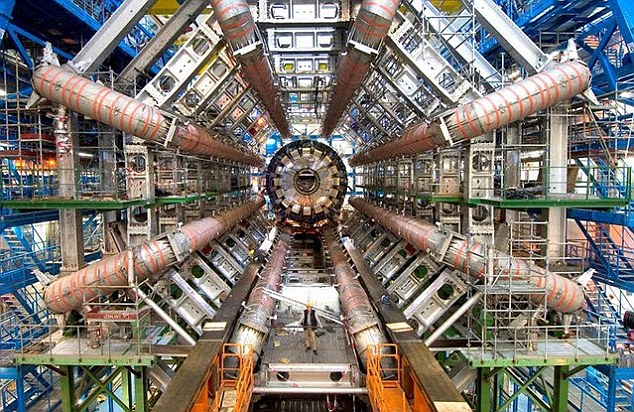 Venugopalan and his former student Kevin Dusling theorised the existence of colour-glass condensate shortly before the particle direction correlation was seen in proton-proton collisions.

While protons at normal energy levels consist of three quarks, they tend to gain an accompanying cluster of gluons at higher energy levels.

These gluons exist as both particles and waves, and their wave functions can be correlated with each other.

This ‘quantum entanglement’ explains how the particles that fly away from the collision can share information such as direction of flight path, Venugopalan says.

The correlation is ‘a very tiny effect, but it’s pointing to something very fundamental about how quarks and gluons are arranged spatially within a proton,’ he says.

The CMS researchers originally set out to use the lead-proton collisions as a ‘reference system’ for comparison with lead-lead collisions.

‘It was supposed to be sort of a reference run—a run in which you can study background effects and then subtract them from the effects that you see in lead-lead collisions.’

That run lasted only four hours, but in January, the CMS collaboration plans to do several weeks of lead-proton collisions, which should allow them to establish whether the collisions really are producing a liquid, Roland says.

This should help narrow down the possible explanations and determine if the effects seen in proton-proton, lead-proton and lead-lead collisions are related.