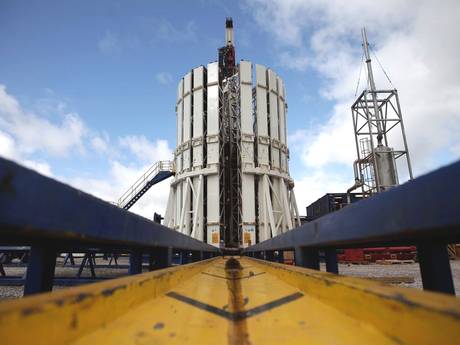 The Government today gave the green light for “fracking” to resume across the UK – potentially allowing for gas exploration to take place across 60 per cent of the country.

Drilling to look for shale gas was put on hold 18 months ago after the process, which uses high-pressure liquid to split rock and extract gas, caused two small earthquakes in Blackpool.

But today Ed Davey the Energy Secretary gave the go-head for fracking to resume – heralding the start of what some in Government believe will be an energy “revolution”.

Mr Davey, who is himself sceptical about the potential of shale gas reserves in the UK, said he was putting in place tough new environmental controls to reduce the risk of seismic activity.

He also insisted that exploiting shale gas in this country would not undermine efforts to cut emissions to tackle climate change.

The Treasury has already signalled its support for the budding industry, proposing tax relief for shale gas, and unveiling a gas generation strategy which potentially paves the way for a new “dash for gas”.

But environmentalists warn that a continued reliance on gas would prevent the UK meeting targets to cut emissions and tackle climate change, and that shale has no place in the move to a low-carbon economy.

Mr Davey said shale gas represented a “promising new potential energy resource” but that we were in very early stage of exploration and it is likely to develop slowly.

“It is essential that its development should not come at the expense of local communities or the environment,” he said. “Fracking must be safe and the public must be confident that it is safe. We are strengthening the stringent regime already in place with new controls around seismic risks. And, as the industry develops, we will remain vigilant to all emerging evidence to ensure fracking is safe and the local environment is protected.”

The controls will include a traffic light system, requiring operators to stop if seismic activity reaches a certain level, magnitude 0.5, which is well below a quake that could be felt at the surface but higher than normal fracking levels.

Interestingly the chief executive of the Committee on Climate Change, David Kennedy, who was recently vetoed by David Cameron as the new Permanent Secretary at Department of Energy and Climate Change dismissed claims that exploiting shale gas in the UK and Europe could push down gas prices.

He said it was not a “game changer” on this side of the Atlantic as it could only meet a relatively small share of gas demand.

However, Cuadrilla currently the only company which has started exploration of shale gas resources in the UK, says reserves in Lancashire could supply a quarter of the UK gas demand in the future.

And it claims emissions from domestic shale gas, managed properly, could be 10 per cent lower than liquefied natural gas (LNG) imported from Qatar, or piped from Russia.

“Shale gas has the potential to create jobs, generate tax revenues, reduce our reliance on imported gas, and improve our balance of payments.

“Our exploration has shown that under Lancashire there is a belt of gas-filled shale over one mile thick.

“Today’s decision will allow continued exploration and testing of the UK’s very significant shale resources in a way that fulfils the highest environmental and community standards.”

The company had drilled three exploration wells and had begun fracking and testing gas flows from one of them when the tremors were detected and fracking was suspended last year. They are in the process of drilling a fourth well.

Now that the go-ahead for fracking has been given in the UK, Cuadrilla must obtain new planning permissions, environmental permits and consent from the Department of Energy and Climate Change for further fracking.

But the company hopes to have initial data on how much gas it might be able to extract by the middle of next year.

Today’s decision also paves the way for potential exploration of shale reserves elsewhere in the UK.

Other areas where fracking for shale has been mooted include near Balcombe, West Sussex, where concerns have been voiced about pollution of water supplies, and in the Mendips, raising fears it could affect the world famous hot springs at Bath. Overall shale gas reserves are thought to be present in across 60 per cent of the British landmass.

Greenpeace energy campaigner Leila Deen said: “George Osborne’s dream of building Dallas in Lancashire is dangerous fantasy. He is not JR Ewing and this is not the US.

“Energy analysts agree the UK cannot replicate the American experience of fracking, and that shale gas will do little or nothing to lower bills.

“Pinning the UK’s energy hopes on an unsubstantiated, polluting fuel is a massive gamble and consumers and the climate will end up paying the price.”

Friends of the Earth Executive Director Andy Atkins, said: “Giving the green light to fracking for shale gas will send shock waves across the UK.

“Communities up and down the country will be disturbed by this reckless decision which threatens to contaminate our air and water and undermine national climate targets.

“George Osborne’s short-sighted dash for gas will leave the country dependent on dirty fossil fuels – MPs must stand up for a safe and affordable future by insisting on clean British energy from the wind, waves and sun.”

“Given the results of previous UK fracking experiences and the limited landmass of the United Kingdom surely fracking cannot proceed unless there is absolutely no risk.

Complete madness in my opinion and would be very interested what view the rest of the population of the United Kingdom thinks of this. Comments please.”