I had to get a look at Durdle Door for myself. I have watched various programs where Durdle Door is featured and even remember it being used as a location for the video of Tears For Fears when they recorded Shout, but still images and moving pictures on a screen provide nothing like the feeling of standing beside this magnificent natural structure.

It’s not only Tears For Fears who have used this is a backdrop of course, it features in many other music videos and films. In the second book of The Last Days Of Planet Earth it serves as a doorway into another world, and so it was only natural that I should take the time to actually see it in person.

The walk towards it as you traverse the steps from Lulworth Cove is oppressive and I wouldn’t recommend it for for anyone averse to a little strenuous exercise. Steep steps take you to the top of the hill where you can gaze down on Durdle Door. Walking back down the other side of the hill will take you to Durdle Door itself where there is a level viewing area to take pictures and rest for a moment or two. The walkway down towards the beach itself is blocked now and to get to the beach itself you have to negotiate an incline that was never meant to serve as access.

Nevertheless when standing on the beach itself you get a sense of awe at standing next one of nature’s most glorious monuments to geology. The downside of course is that to get back to Lulworth Cove you have to  climb and walk again, only this time in reverse. It was only when I returned to Lulworth Cove itself that someone pointed out  I could have driven to a more accessible and less punishing point to view Durdle Door, but that meant missing the challenge and the view at the top of the hill.

I really recommend a visit to Durdle Door for anyone not only from the United Kingdom, but from anywhere in the world. Hats off by the way to the guy from the United States who was taking loads of pictures at every possible angle and vantage point. He was clearly impressed by its beauty and scenic wonder and I am sure you will be too.

I hope I can bring to life just a small fraction of the sense of history and wonder that Durdle Door exudes, when detailed in the second book.

If I achieve that, I will be a very happy man. 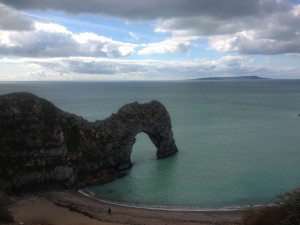 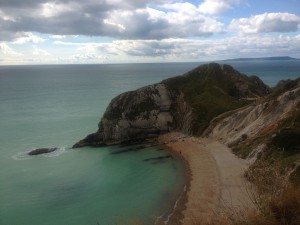 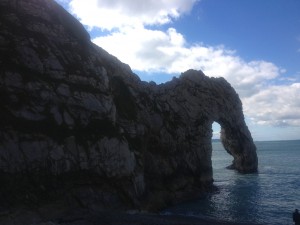