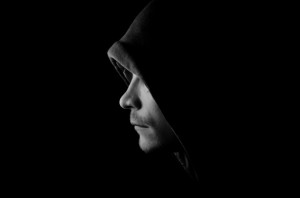 The child rejected by his family and kept from  friends. Stranded far from  home with no plausible way to return. His only intent is to find a way, find the means to return to the land of his youth, to reclaim his  heritage. His eyes fixed in a singular gaze to the stars, this is his absolute, his only desire. All will fall before him, washed away by words or death as he makes his plans against his jailers. The fires of Hell will be lit in celebration at his victories as he keeps the Angels from the gateway. Hades will stay peaceful and calm whilst The One inhabits the Earth. The gateway will remain closed and the armies of Hell will have no need to taste the blood of men. Living many life times and wearing many guises will breed his malevolence as his intellect increases beyond understanding. Always guiding and nudging the hand of man towards his own needs and desires, the Great Deceiver remains the greatest single danger to man to walk the Earth. Yet he remains your hope, your only hope, your only means of preventing the Rapture, preventing  colonization of the planet by Angels.

He will not aid you easily though. You must deceive The One, make him believe that only through aiding your fight can he return home and meet his aims. He has walked this Earth for centuries but will not easily be recognized as he wears the faces of many men. Only through words will you discover his true form. Lure him to your tongue and entrap him with your plans. Tell him that you cannot succeed in your task without his presence, for this is the truth.

He commands the force of nature that dwells in the caves and the beings that hunt at night lest they burn in the day. The brides of Satan, the witches, will flock to his call despite their contempt for him. He and his armies of darkness will stand by your side to defend the borders of the fatherland against the rampaging horde. Keep one eye on The One and another on the gateway, for if the King of Hell worries for his dimension, the armies of Hell will pour forth from the gateway, crushing everything in their path. Find the seals before the Angels, for they mean to walk in the fields of Hades and spread their seed. Find the seals and close the gateway forever, giving Hades peace of mind and the Earth freedom from disaster. Raphael had the answer. Loathe to give the seals to his lords, he hid them among his children and banished them to the Earth. There are eight seals and eight children. Tell The One that you have discovered the permanent solution to the gateway of Hell. He will rush to your side as he will be desperate to close the matter once and for all.

Find the children of Raphael and seal the gateway. Then make a deal with the Devil and save the Earth.