They say that love is blind, but can it be fatal? Atom is now available 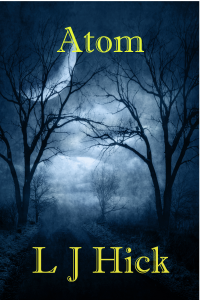 Sam and Scott are a couple of teenagers who live in the small town of Atom. One year ago, a macabre multiple murder shocked the town. Sam’s father, Brad Newell, who also happens to be the local sheriff, was badly affected by this. Although things have quietened down now, and they are enjoying the arrival of summer, Scott and Sam are still intrigued about the events of a year ago. When a stranger buys the house where the murders were committed, the boys pay him a visit. The stranger proves to be a rude and unusual looking man called Felstar.  Before long, Brad is called to investigate a homicide that has all the hallmarks of the previous murders, and he begins to question his own competence. Some of the townsfolk ridicule Brad as he seems incapable of solving the crimes. The pressure places a considerable strain on the increasingly fragile marriage of Sam’s parents, causing Sam to take an active interest in the crimes. Sam seeks advice from his grandfather, George, who seems to know more than he is willing to say. As if things are not bad enough, Scott is infuriated when he discovers that his mother has fallen for Felstar. They say that love is blind but this is more than Scott can stand. Sam and Scott resolve to crack the mystery of the murders, together with the help of their amiable teacher, Richard Taylor. As the body count stacks up, the townsfolk start to take the law into their own hands. The fingers of suspicion are pointing firmly at Felstar, but Felstar intends to do an awful lot more than just point back.

Atom will be released on the 1st June 2016 with a new look cover. It will be available from Smashwords, Amazon and other selected retailers.